Venice’s hidden gems lay in the city’s quiet side streets, full of charm and away from the crowds.

You can arrive in Venice and see all the major sites in less than a few hours.

There’s the Piazza San Marco and its famous pigeons. There are the royal splendours at Doge’s Palace and the views from atop the iconic campanile.

But you probably won’t remember much of the city. You’ll recall crowds, your hurried guide and the cool interiors of marble churches.

The hidden gems of Venice

But if you spend a few days in Venice and wander its sidestreets without an itinerary, you’ll have an unforgettable experience. You’ll see the real city off the beaten path.

Venice, like many cities along the Mediterranean, suffers from overtourism and is literally sinking under the weight of massive cruise ships. In the summer the crowds induce claustrophobia, pushing through narrow streets full of plastic Venetian maps and overpriced espresso.

But Venice doesn’t have to be that way. The charm of the city that’s inspired generations of artists can’t be found along the well-beaten tourist path. The magic of this city lays in its side streets.

Venice shines in the off-season. And if you’re brave enough to visit in the autumn or winter months, you’ll get sunny days and far fewer crowds.

The crowds set out in the early mornings pumping tirelessly into Piazza San Marco, past pizzarias and ominous cruise ships that loom stories high.

There are a few routes to get there. And they’re well-marked with signs pointing the way. But soon the smaller canals and bridges will tempt you.

If you wander into a side street you’ll realise it’s just a few steps away from the crowded main route. But it’s as peaceful as a small town on a Sunday afternoon.

Because even a block away from the Canal Grande, the city is so quiet it feels like you’re trespassing.

You’ll spot a few other tourists just as curious as you. But you’ll feel like you’ve got the city all to yourself.

There are hidden courtyards to explore, balconies overflowing with blossoms and grand hotel lobbies to duck into and escape the rain.

When you get lost, you won’t really mind.

You’ll see women having conversations with neighbours from across their balconies as they hang laundry. You’ll see couples walking together pushing strollers. All of this against a backdrop of terracotta plant pots spilling from tiny balconies, and streets where the sidewalk cuts off abruptly at sea water.

You’ll think you’ve discovered a secret. And you’ll wonder why so few tourists are around while the majority keep heaving towards the piazza.

But sometimes crowds aren’t a good indication of anything besides more crowds.

It must be human instinct to be drawn to that warm humanity of crowds – and they are hard to resist. Walk through an old market and you can’t help wandering over to the stall with the longest line. Surely that spice vendor must have something worth the hype.

But if you take a few steps off that main road, you’ll be dumbfounded at how beautiful it is to carve out your own itinerary.

Exploring the side streets

Use St Mark’s as a rough landmark. Follow the Canal Grande to the square, then take another day to walk along the Giudecca Canal.

The city’s better-known landmarks like the Rialto Bridge will take on an easy familiarity. But you won’t often pass the same sights twice, even if you stay in Venice for a few days.

The city is endlessly fascinating and the more you’ll explore, the more curious you’ll get.

There’s enough in Venice for at least a few days of exploring. And it’s unfortunate that many visitors just rush through without taking the time to explore any side streets.

It’s impossible to really get lost in Venice, after all. It’s surrounded by water so you’ll always know when you’ve reached the edge and it’s time to turn back.

And although it has remarkable museums and historic sites, the magic of Venice lays in its atmosphere.

24 Tips For Working From Home (And Being Productive)

Moscow One Day Itinerary: What You Shouldn’t Miss 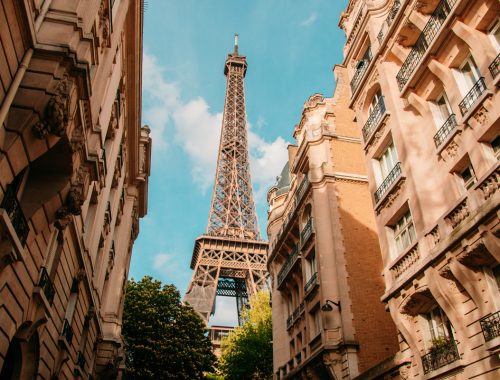 Paris One Day Itinerary: What You Shouldn’t Miss