Get off the beaten path and discover the city beyond the usual stereotypes. Here are my picks for must-see hidden gems in Cairo.

Sightseeing in Cairo is usually a rushed affair. There’s a lot to see and it’s all often packed into a one-day itinerary that pushes tourists through the major sites without much depth.

Do you think travel always broadens the mind? A friend once told me she knew a group that visited Cairo and still insisted that most Egyptians ride camels. Apparently they flew in at night, went straight to Giza for a day and then flew to Luxor, none the wiser.

Independent travellers get stuck in tourist traps too because there’s not much info online about Cairo beyond the major tourist attractions. A friend of mine visiting from Britain signed up for a Nile cruise with dinner one evening because it sounded like a good time. But after a stale buffet and a performance by an Eastern European belly dancer, she joked she’d considered jumping into the Nile.

If you want a well-rounded image of modern-day Cairo, then visit some hidden gems and get to know the daily life of the city.

This is the Cairo of small museums, quirky bookshops, scenic parks and hip galleries.

It’s the city that lays outside of the oriental stereotypes and the budget itineraries for the masses. It’s the city you’ll show on Instagram Stories and get DMs saying, “I didn’t know they had that in Egypt.”

These are the must-see hidden gems in Cairo:

Darb is a culture center that offers exhibits of contemporary Egyptian art in the heart of Old Cairo. When the weather’s nice, there are rooftop concerts by anyone from Pink Floyd cover bands to Egyptian folk-inspired jazz. In the summers there are films and movie festivals in the small garden where you can sit back on bean bags and catch some subtitled masterpieces.

Fustat was Egypt’s first capital known for its pottery. And Darb offers ceramic workshops where you can learn this ancient craft. It’s an artsy hotspot in a neighborhood filled with mechanics workshops and shisha cafes. Sign up for the workshops on Darb’s website and follow their Facebook page for upcoming events.

The Nile Zamalek is a two-star hotel with five-star views on its rooftop, which is often filled with Zamalek expats and locals alike enjoying beers in the sun and sweeping Nile views. It’s tattered around the edges with vintage beer posters and chandeliers made of empty beer bottles. But the atmosphere is great, especially in the summer when it’s breezy up there.

Try Stella, an Egyptian lager, or Sakara Gold, a lighter beer perfect for summer afternoons. The menu is good for beer munchies but not much else.

When I first visited Egypt, our local tour guide spoke about “The City of the Dead” in hushed tones as we drove by, dropping sexy keywords like “criminals in hiding” and “people living among the graves.”

Now I love this place for MASQ, a cultural center that hosts concerts, workshops and events, and the murals and graffiti surrounding the Maq’ad. The mouse you’ll see reappearing on different walls (once holding a Pharaonic cat by a chain, in another place with a can of spray paint) is the work of Polish graffiti artist Franek Mysza.

The neighbourhood – a necropolis and a UNESCO heritage site – is full of architectural gems, splendid mosques from the Mamluk era, and graveyards amid modern apartment blocks.

It’s also a great place to shop if you like handmade and authentic crafts like glass-blown vases and cups, brass jewellery and leather goods. Stop by the Mishka boutique for a start. 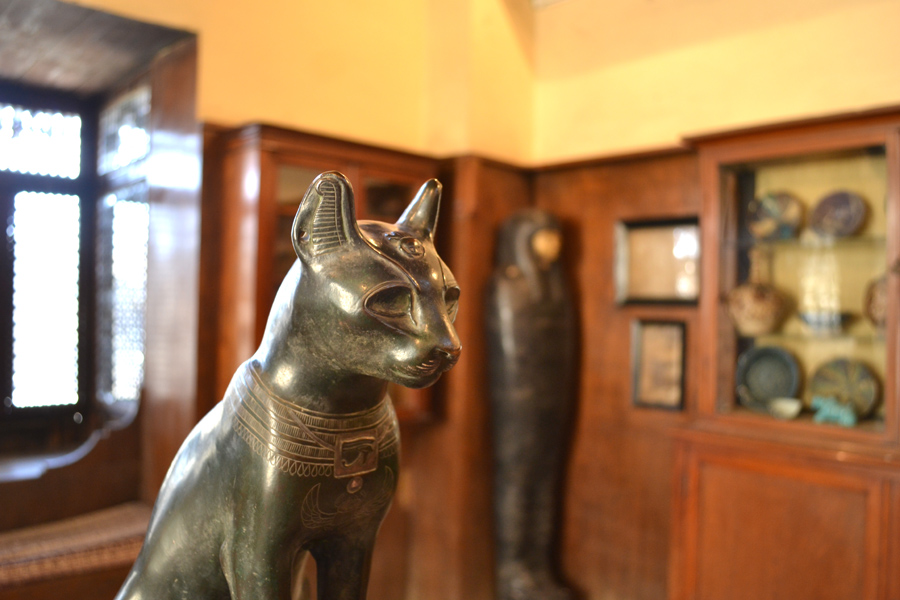 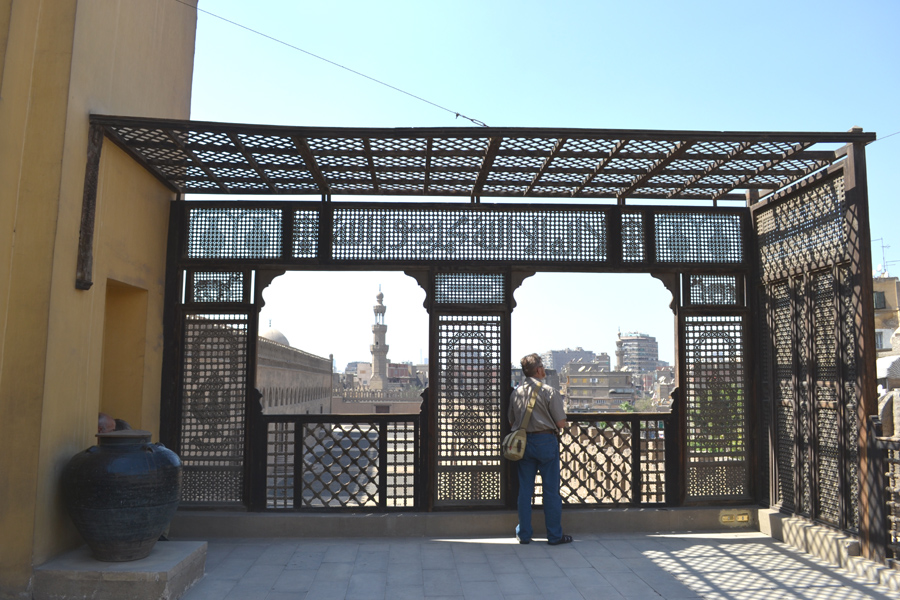 This is a well-preserved residence from the 17th century full of artwork and curiosities that was once home to an eccentric Irish Egyptologist.

It includes a haram room used by the wives and children of the house and a secret chamber used as a hiding place (for people or things).

There’s great views of the Mosque of Ibn Tulun, another less-visited gem.

The roof garden with its elaborate mashrabiyas was featured in the James Bond classic The Spy Who Loved Me.

Townhouse has modern art exhibits and a shop full of fun souvenirs with imagery from Egyptian pop culture. There’s a great colorful mural outside of Arabic calligraphy, and the gallery shop is great for handmade jewellery and quirky finds like stationary printed with old Arabic-language Mickey Mouse comics or Cairo’s classic metro tickets.

There are occasional artist talks and events, so check their Facebook page for the latest. Relax with a shisha in the evening at one of the surrounding cafes.

This abandoned palace is opulence turned to decay. It’s closed but the guard doesn’t mind visitors taking photos through the fence. Walk around the building to marvel at the crumbling regal architecture.

It was built for Said Halim Pasha by Slovanian-Italian architect Antonio Lasciac, then later turned into a school after nationalization. It stands empty today but gets attention as a stop on local walking tours. 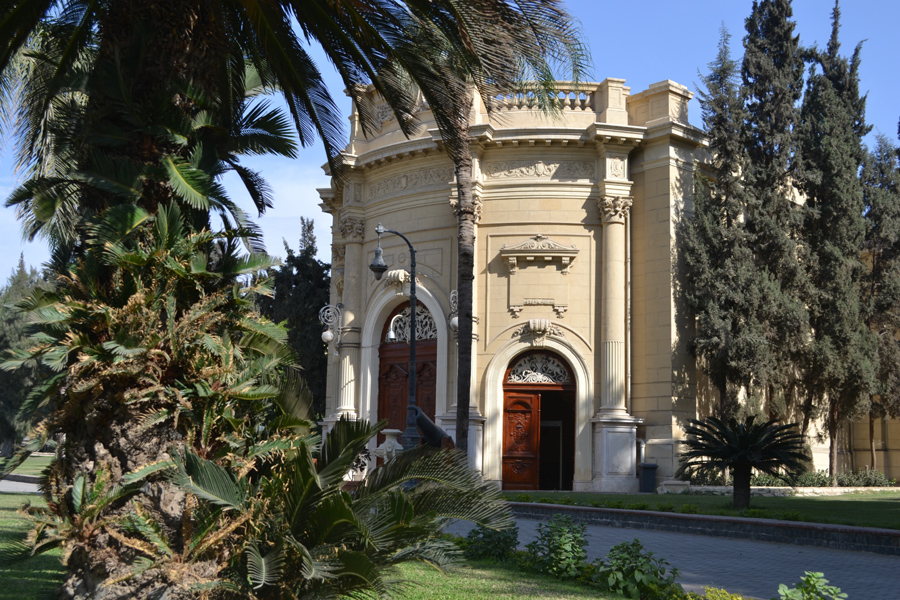 Abdeen Palace is filled with presidential gifts, curiosities and royal treasures from the reigns of Egypt’s leaders. There’s a collection of presidential gifts given to Egyptian leaders and Hosni Mubarak, the last president to reside at the palace. The gifts include jewels and a Japanese model of a Samurai crown.

Then there’s King Farouk’s odd collection of American buttons. The silverware section boasts a vast collection of royal porcelain and table services. The palace, built in 1863, also includes some beautiful gardens for wandering. 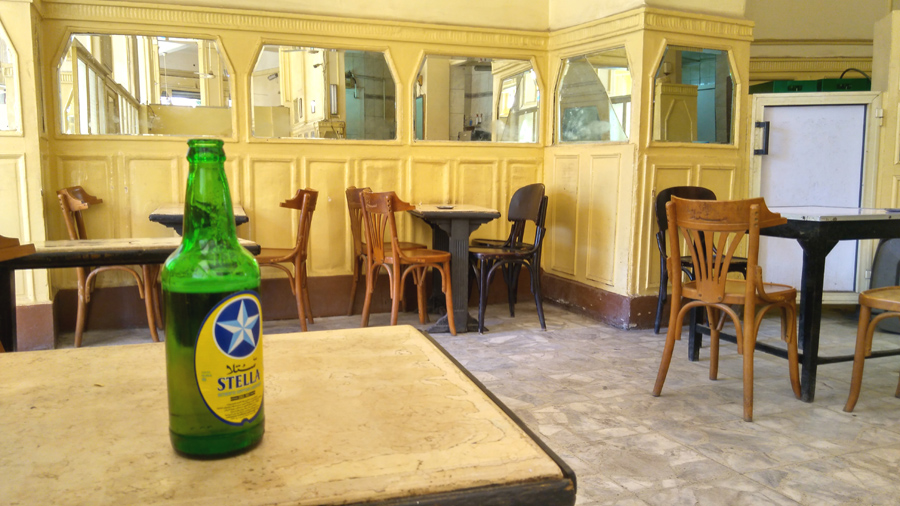 This run-down bar packs weathered charm that’s popular with downtown locals, artists and expats. There’s tea and coffee in the front of the cafe, where locals gather to play chess, and cold beers in the back section including the local favourite lagers Stella and Sakara.

NGO workers, locals and friends pack the bar on weekends. It’s a great spot in downtown to enjoy a cold beer – and it’s open until 2 a.m. But tread lightly on humid summer days. The AC isn’t great though the beer is still ice cold and the service is friendly.

This bookstore offers an amazing selection of books published by AUC Press. There’s everything from coffee table books on Egyptology to scholarly books on Ancient Egypt and a great selection of Arab literature in translation.

Start here if you want to learn more about Egyptian culture. There are cookbooks on traditional Egyptian dishes, workbooks to learn Arabic and accounts of the January 25th uprising. There’s also a great selection of English-language books.

The small hall is a great alternative to the main hall’s grand ballets and opera. Tickets are a real bargain, and the wood-panelled walls and 500-people capacity feels like a private concert.

Al Azhar Park is a perfect getaway from the rush of the city. And it’s all build atop of what was once a huge garbage dump.

There are rows of palm trees and grassy field, and an observation point with binoculars if you want great vantage points of Islamic Cairo and its historic minarets.

Studio Misr is a restaurant with classic Egyptian decor and views of the nearby citadel. But avoid weekends unless you like noisy crowds and family picnics. 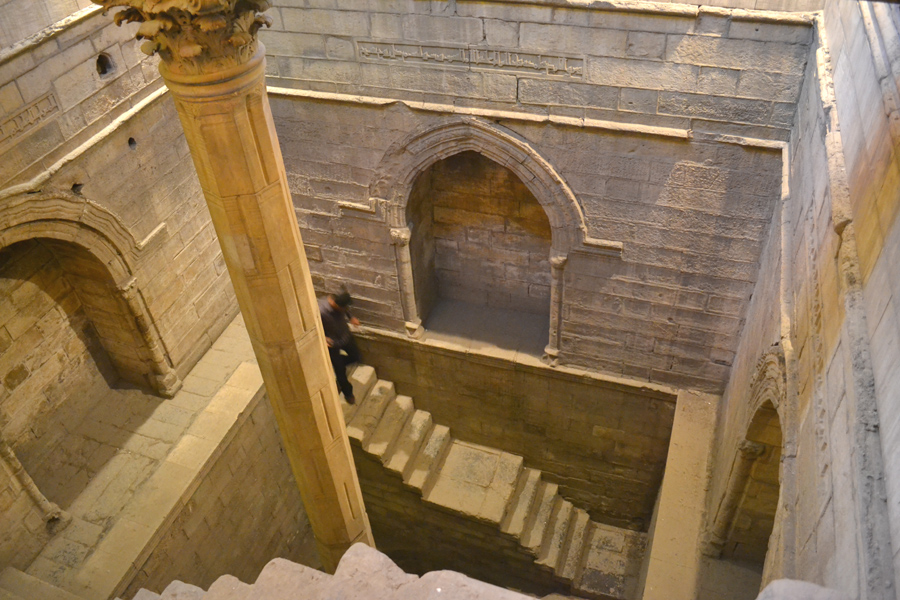 Built in 861 AD, the Nilometer once measured flood levels of the Nile river. It predicted famine, harvest or flood. The column that resembles a giant ruler measures water levels.

It’s one of the city’s oldest structures and surrounded by beautiful Nile views.

You can view the full length of the column by descending a winding staircase to the bottom. The Nilometer is topped by an elegant reconstructed dome (the original was destroyed by the French during their invasion of Egypt).

The Coronavirus and Overtourism

5 Best Things to do in Fayoum, Egypt

A Slow Travel Guide To The Giza Pyramids