The Grand Canyon makes an epic road trip, but it can get hectic with tourists. The park’s Hermit Road offers scenic views that are quiet in the off season.

My road trip to the Grand Canyon with my father begins like road trips usually do in our family: a groggy wake-up before dawn, sweet coffee and greasy donuts at a gas station, and hours of talk radio as the sun comes up and the city fades into desert highways.

And though I’d grown up in Arizona and driven hundreds of familiar miles across the state, our 3-day road trip would still make me feel like an explorer. Arizona isn’t the kitschy cowboy state of golf and retirement that it used to be.

As Highway 87 takes us north, and as the sandy desert turn into rolling hills of pine trees, my father asks: “So how have you been?”

I’d been back home for the holidays for awhile, but we didn’t get a chance to talk amid the madness of shopping and cooking. Now theress nothing but an empty road before us.

So I complain about my job and my father lays out plans for his retirement. Our words come easier and purer in the silence with no TV or phone as distractions.

And even though our family is no longer all piled together in a station wagon, road trips are still what they used to be even when so much else has changed. Despite the wrong turns and the bickering, they’re still times for bonding and creating memories.

A Stop in Pine, Arizona

We spent the first day of our trip in Pine, an unincorporated community roughly 100 miles north of Phoenix that’s a quickly growing vacation spot.

We stay in a wooden cabin and spend the rest of the afternoon walking through the surrounding hills, pine needles scrunching under our feet and crisp air filling our lungs. I spot an old mule deer through the trees munching away slowly and unfazed by our footsteps. A chubby, black-and-white cat stares at us from a porch.

Yes, there are plenty of snowbirds (visitors from the colder states who spend their winters in the Arizona sun), but there are also increasing numbers of young people buying up wood cabins for weekend escapes, and chic Airbnbs with rolling porches overlooking the pine forest.

That evening we head to Old County Inn for a few craft beers over pizza baked in a wood-fired oven. It’s packed inside and the wood paneled walls are decked with antlers, green neon lights and old landscape paintings. A gay couple next to us at the bar jokes with the cook about writing the great American novel. The vibe is more reminiscent of Brooklyn or Shoreditch than a community in rural Arizona that only hit a population of some 2.3k people in the last census.

With a long drive ahead of us tomorrow, we call it a night and head back to the cabin. I nestle in under thick blankets with my packed bags by the nightstand.

The next morning, my father and I pile into the truck to drive a few hours further up north and arrive at the Grand Canyon National Park when the lines at the entrance are still small.

Considered a holy site by the Pueblo people, Spanish invaders would later call the Grand Canyon “profound” and marvel that some of its rocks were bigger than Seville’s great tower. It reaches depths of over a mile, formed over some 70 million years.

The national park is huge and covers some 1,900 square miles. Alongside the looming canyon that stretches out like an ocean into infinity, there are two Visitor Centers, a Market Plaza complete with a post office, a few lodges and a hotel.

It’s easy to get lost, and we do soon after we park. I ask a park ranger: “I’m sorry, but where’s the canyon?” She points us in the right direction and soon we’re looking over its edge.

Unlike the usual horizon line, which neatly divides space into earth and sky, the horizon line at the canyon is ragged and blurred. It doesn’t mark a neat division, but swoops and plunges deep down to the Colorado River to show you the vastness and depth of the earth – and our fragile place in it.

A brief moment of inattention with an unruly selfie stick, or an overzealous attempt at the perfect Instagram photo, could send you plunging towards death. Of the 4.5 million people who visit the Grand Canyon each year, an average of 12 people die.

There are times I get lightheaded and grab on to a railing, and other times I walk pathways that skirt too close to the edge and leave me grasping trees for stability.

We never venture past the well-worn trails marked out for visitors, but others do. I see a family egging on a young girl to pose at the edge of a cliff while they snap photos, and a woman protesting as her husband laughs and entices her down a steep trail.

This 8-mile scenic route includes 9 overlooks with canyon and river views. It ends with a snack bar and toilets at Hermit’s Rest. It is the route less travelled and we’re lucky to be at the canyon when private vehicles are allowed (December-February).

The Hermit Trail and other features in this part of the canyon are named after Canadian-born miner and explorer Louis Boucher, who had a mule named Calamity Jane. Though he wasn’t a true hermit, Boucher carved a trail into the canyon and lived alone for years near a spring.

The sun is starting to decline and we turn to leave. Back on the road, we stop at a drive-through and browse the souvenirs at a nearby gift shop. My father gets me an ochre yellow map of Route 66 that now hangs in my home in Cairo.

Inspiration for next year’s road trip?

It’s dark when we get back to our cabin in Pine. I have a couple beers and watch a documentary about The Nutcracker. We’d already gone over tomorrow’s plans and I have some exciting landmarks circled on the map. 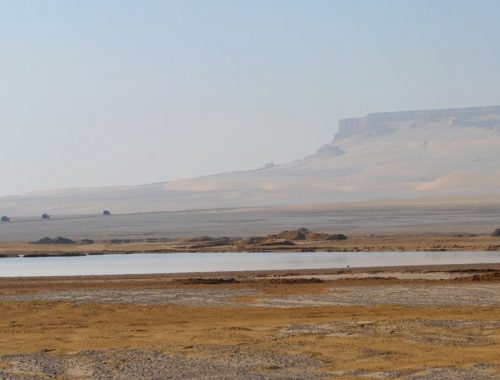 How To Uncover The Hidden Gems Of Venice